With the birth of cloud-based applications came a new prerogative for those using them, user experience (UX).

Whereas traditionally developers saw this as second place to functionality, the cloud provided the opportunity to test and refine how people experienced software – speeding up essential tasks and making enterprises more effective. UX grew into a differentiating factor in product delivery.

Microsoft has worked hard to overcome its legacy reputation as an organisation playing second fiddle in this area to ‘the big tech giant in Cupertino’ – especially with its widely adopted cloud native applications, of which Microsoft 365 is the lead.

Once characterised by Clippy, the company’s UX team now orchestrates the full range of methodologies, including AI, predictive analytics, chat bots, conversational UX and a whole ocean of data insights.

There is one area where all the good work can fall apart though. If the underlying delivery of Microsoft 365 is being throttled from an infrastructure point of view, as often happens with security technology, no amount of smart code from Redmond will help.

In essence, Microsoft 365 is a relatively intensive application – if the network infrastructure setup is not optimal, it manifests as a number of issues such as poor-quality Teams delivery, slow load time of apps, bad quality video conferencing and can even increase the workload for helpdesks. This can become at best an inconvenience for employees and at worst, a blight on productivity.

In fact, it is such an issue that in a recent piece of research Censornet carried out amongst enterprise technology teams, it is second in mind only to data security / general IT security when they are thinking of deploying Microsoft 365, more so even than the dreaded downtime. 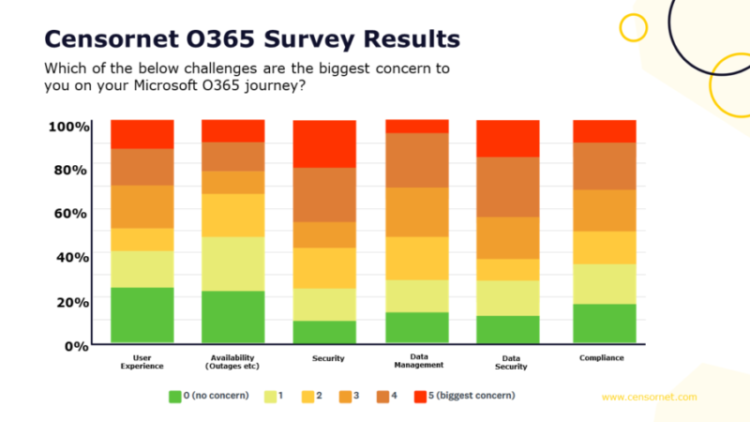 Unfortunately, security countermeasures often introduce latency because, by their nature, they want to analyse the information as it flows, checking it against rules and policies. This often means sitting between the network and the Internet in the form of a proxy or gateway.

This approach is against Microsoft recommended best practice, which recommends a Direct to Internet connection as the optimal method for delivery.

In addition, the gateway approach can add significant latency which, in turn, degrades UX. Therefore, all too often, security teams feel they are backed into a corner having to make a binary decision between UX and security.

Does it always have to be a trade-off?

The good news is that it doesn’t. Modern solution providers, such as Censornet, which are built for a cloud native world, have taken this into account by designing a platform architecture to minimise latency issues.

This ultra-modern way of delivering security for Microsoft 365 recognises that UX and security must be able to co-exist whilst using Direct to Internet connections, as recommended by Microsoft in their connectivity guidelines.

This approach overcomes the legacy approach which, as Microsoft puts it, “Without optimization, traffic between users and SaaS applications is subject to latency introduced by packet inspection, network hairpins, inadvertent connections to geographically distant endpoints and other factors.”

The only way of doing this, without fully bypassing valid internal security measures such as proxies and gateways, is through the use of a solution which is built specifically with Microsoft 365 in mind and which peers directly with the nearest data centre.

For more information on how to protect your organisation in today’s technology environment where users expect instant always-on access to applications and data from the closest device to hand, visit the Defence365 hub, which is loaded with case studies and information on how companies can reap the benefits of a cloud-based world, whilst remaining secure.

Defence365 Vlog: How to improve the performance of Office 365

Split Tunnelling – what’s it all about?

With the final few elements of the once secure citadel that was the enterprise network heading outside of the perimeter, ...

It was assumed by many the debate around Bring Your Own Device (BYOD) had ended in stalemate some time ago, ...

How do you drive remote workforce productivity, while also staying secure?

Digital transformation has long been driving productivity in businesses, even before the global pandemic blew through the world of work ...

Get a live demo